A pulsating match at the AESSEAL New York Stadium saw the Millers secure the three points after a 3-2 win over Bury.

Having dominated the majority of the game, Rotherham left it until the last minute as Richie Towell thumped home in the 90th minute to give Paul Warne’s side all of the points.

Speaking after the game, Warne said: “We try and keep the fans entertained until the last minute. It’s not good for my health or my hairline!

“I thought we deserved to win much more comfortable than that. I’ve reprimanded the team a little bit after congratulating them. I’ve said to them that they’re close to excellence. This tam can achieve anything they want to if they believe a little bit. 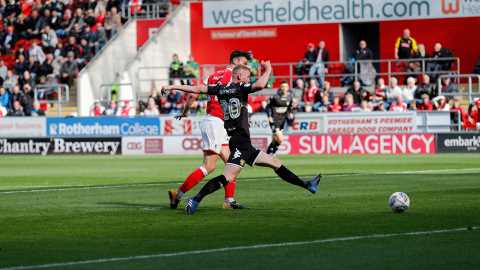 Match report for Rotherham United vs Bury on 09 Sep 17

“I’m hugely disappointed with the goals we conceded but I think we fully deserved the win. They could have had eight, so I’m happy in that respect.

“They’re an amazing group to work with. I’ve got some amazing personalities, which is good, and they’re all winners. We had Shaun (Cummings) who dropped out early on. I was happy with the personal battles. My top performer was probably Potter in the middle, again I think he controls us really well and allows others to go on.

“We did miss a lot of chances but, generally, I was really pleased with the performance. Even if we’d have drawn today – which would have been a huge disappointment – I couldn’t have criticised the lads’ intent to win football matches.

“I made attacking subs and went 4-4-2. We can enjoy this win for a few hours then we’ll get up and start again tomorrow.”

Twice the Millers were pegged back after Kieffer Moore gave his side the lead, initially with a well-taken finish and then a header in the second half. But Towell was the man – making his home debut – who swept home the winner to spark jubilant scenes in front of the home supporters.

“It’s a fun way to win a football match, scoring late on like that,” continued Warne.

“It sets us up nicely for Tuesday night for a home game. It’ll be a completely different game and then we go to Bradford who have won today at Peterborough. They’ll be really tough. If I can I’ll look to rotate it a bit.”

Speaking of an injury to Shaun Cummings, who was taken off in the first half, Warne added: “The lads are slowly but surely getting my message; that’s if you’re not 100 per cent fit, you don’t play. Shaun said he felt like he was tightening up so he came off as a precaution. Realistically, Tuesday will be out of the window.