Rotherham United boss Paul Warne says he expects a tough test against a Scunthorpe United side who he believes will be once again in and around the Sky Bet League One Play-offs come the end of the season.

The Iron enjoyed a good campaign under the guidance of Graham Alexander in 2016/17, narrowly missing out on promotion as they were defeated by the eventual winners Millwall in the semi-finals, and Warne believes they are likely to have an equally successful year this time out.

“I watched them in the Play-offs and against Donny a few weeks ago on a Sunday and for me, they're always going to be top eight,” he told www.themillers.co.uk.

“Where they are in the top eight is dependent on form obviously, but they've got a really good team.”

Warne also took time to praise the resilience of Alexander’s side, who have the joint meanest rearguard in the division with Wigan Athletic having conceded just seven goals in the league so far.

With a blend of elder statesmen and youngsters looking to make their name in the game amidst the Scunthorpe ranks, the Millers boss says he expects Saturday’s opponents to go ‘toe-to-toe’ with his side at AESSEAL New York Stadium.

“I think they've got a really good mix of youth and experienced pros and they're always really difficult to break down,” Warne explained.

“They're really organised in their shape and they all know their roles really well. They don't necessarily score loads but they don't usually concede more than one goal at any given time.

“They're really hard to break down and I appreciate that they conceded two against Wigan at the weekend, but generally that's not the case.

“I think they'll come here on Saturday in decent form and I know they lost to Wigan but most teams are at the moment.

“Before that they'd done really well and they'll come here and go toe-to-toe with us and it'll be an exciting game.” 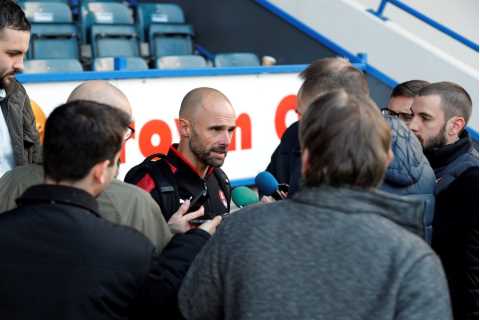 A familiar face will return to a Rotherham dugout as former Millers’ coach Nick Daws visits as part of the Iron’s coaching staff, and Warne admits he gleaned a lot from him during their time together with the Millers.

“I think I learned a lot about being fair and honest being the better way than always trying to be popular from him, which was possibly my way,” he continued.

“I always liked to be the joker of the pack so to speak, so I think Dawsy taught me a little bit about documenting everything.

“He's a great lad, he does loads of cycling and I met him for a coffee not long ago in the summer. He's done really well with his coaching career and he went and worked with QPR for a bit and then came back up here.

“He went away from the fitness side and went into coaching. He worked with Breck and he speaks really highly of him as well. It'll be nice to see Dawsy, he's a really good gentleman.”