The Millers welcome Scunthorpe United to the AESSEAL New York Stadium this weekend, looking to build on last weekend’s 1-0 away victory at Rochdale.

The Millers are looking to continue their recent momentum, after winning three of their last five league games.

Millers boss Paul Warne will be hoping for a repeat of the Millers’ past two performances, with 1-0 home and away wins, against Northampton Town and Rochdale respectively.

Rotherham were 1-0 winners over Rochdale last weekend, with Richard Wood’s header settling a tight contest in the second half.

It could have been more for Rotherham who had three great chances before the interval, with Will Vaulks heading wide their best opportunity.

The opener came in the 57th minute, as Wood got ahead of his marker to head home Anthony Forde’s corner kick.

Rochdale came close to an equaliser with Steven Davies’ header coming back off the crossbar before Brad Inman missed from three yards out late on.

Scunthorpe were beaten 2-1 at home by 10-man Wigan Athletic last Saturday, as the visitors maintained their impressive start to the campaign.

Nick Powell got the crucial goal in this game with a 74th minute strike.

Wigan opened the scoring in the 51st minute when defender Dan Burn netted after he was allowed to turn in the penalty area.

The visitors lost Lee Evans to a red card but still doubled their lead, as Powell tucked the ball into the far corner from a tight angle.

Scunthorpe did get a goal back through Funso Ojo, but it was too little too late for the home side.

Former Blackpool goalkeeper Matt Gilks has played every minute in Scunthorpe’s league campaign this season, keeping seven clean sheets in the process. The goalkeeper also has an impressive 80.6% save ratio so far this season. He will be hoping to keep another clean sheet come Saturday.

Gilks was a summer recruit for Scunthorpe, having joined them from Wigan on a free transfer. 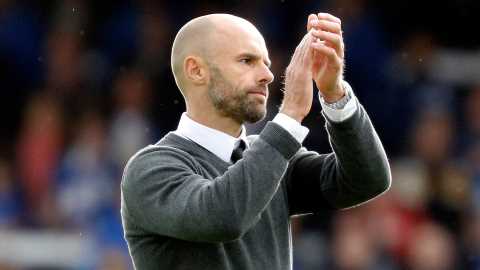 The 35-year-old, former Blackpool and Norwich City goalkeeper, has made over 400 appearances in his career to date

The last competitive meeting between the two sides was in 2009.

They met in the Northern Area final of the Johnstone’s Paint Trophy, which saw Scunthorpe advance through to the overall final after Gary Hooper’s goal clinched a 3-0 aggregate win at Don Valley Stadium.

The last league meeting came in 2007 when Scunthorpe won 1-0 at Glanford Park thanks to a Jermaine Beckford winner.

Lee Frecklington is a doubt following his withdrawal in the opening minutes at Rochdale, but despite fears of a long lay-off, manager Paul Warne confirmed there is a possibility that the midfielder could play this weekend. Joe Newell remains doubtful with a sore quad, whilst Jon Taylor and Ben Purrington remain sidelined.