The purpose of the Premier League Kicks initiative through Rotherham United Community Sports Trust, is to provide safe sporting activities for young people in the area of Rotherham. Our overall aims are to reduce the rates of anti-social behaviour. In addition to this, our intention is to promote community cohesion, as well as linking with Rotherham Health and Wellbeing strategy.

Since the start of September our Premier League Kicks project has grown from strength to strength across multiple sites in Rotherham. Our hub sessions caters for various satellites within the central belt of Rotherham which is amongst the most deprived in the borough. We have delivered activities to both males and females from Ferham, Eastwood, Maltby, Wingifled Academy, Rawmarsh, Canklow, Wath and Wickersley utilising facilities such as parks, MUGA’s, youth clubs and school facilities. Additionally we have delivered circuit training, cycling and boxing in our community health suite.

At present we have over 200 young people accessing our diversionary activity on a weekly basis, as part of our Kicks project. We have used the delivery of Kicks as part of a wider engagement tool that has seen us refer young people on to other activities such as hate crime workshops, BBC Children in Need workshops, football tournaments and our inclusion/cohesion football team United 4 Communities.

On Monday 30th October 12-3pm we hosted a Premier League Kicks Tournament at Rotherham Football Centre, for 11-13 year olds that access our Premier League Kicks provision. The event had a number of important and multifaceted messages to convey, including advertising the fact that RUFC will be hosting the final of the U17’s EURO Championship final. The aim was to integrate young people from diverse cultural and ethnic backgrounds, to break down barriers through football. The event saw the attendance of eight teams with over seventy young people reigning from the aforementioned areas. It encapsulated concept of diversity by integration young people from varying ethnicities such as: Roma, white British, Polish, Black African, Asian and Slovakian.

The teams played five minute matches in a tournament style competition, which led on to a semi-final and then a final. Awards we presented for fair play award, player of the tournament and the overall winning team. Following on from this, we then offered a BBC Children in Need health workshop at Cranworth Road Sports Centre across the road, where we invited Rotherham United professional footballers Lewis Price and Marek Rodák who answered questions and took photos with the young people. The day’s events subsequently finished with a PL Kicks football session. 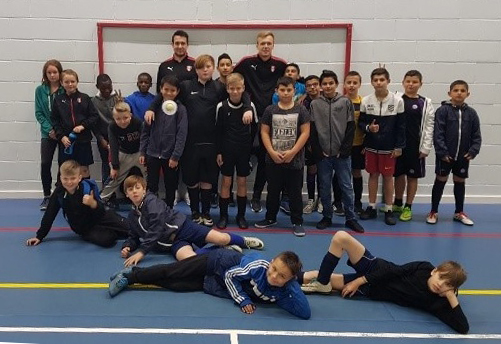