Ben Purrington is targeting a first-team return in the coming weeks after stepping up his rehabilitation from a hamstring injury.

The left-back was forced off during the opening exchanges of the away fixture at Blackburn in September, which resulted in a spell on the sidelines just as he was looking to establish himself in the side.

The ex-Plymouth ace has been working hard behind the scenes, with boss Paul Warne hinting that a return to full training isn't far away for the likable defender.

"I had a little run in the team and we had some good wins so things were going well," Purrington explained to www.themillers.co.uk

"I suddenly then got injured and it has been very frustrating. It has been around eight or nine weeks now since I last played, so it is frustrating but that's football and you just have to get on with it. I'm getting there now, so my aim is to try and get fit as quickly as possible, and then I face a battle to get back into the team." 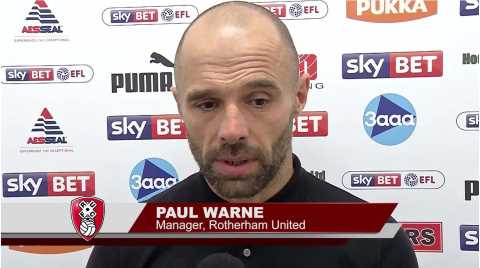 Purrington started the season behind Joe Mattock in the pecking order, but forced his way into the side for the away success at Portsmouth and the home wins over Bury and Oldham.

After picking up the injury at Ewood Park, Purrington knew he faced at least two months in the treatment room, but he now sees a return on the horizon knowing his former club Plymouth are the next visitors to AESSEAL New York Stadium on December 16th.

"When I picked up the injury we originally thought it would be eight weeks out," Purrington added.

"It was quite a bad tear, so I am not miles away from when I thought I'd be back, but there was a small setback in my recovery. That was frustrating because I was making good progress, and I was thinking that I may be back earlier than I thought, but it was only a minor setback and hopefully it won't be too long before I get back.

"I've been on the grass with the fitness team, so the next step is getting involved in training with the lads and then maybe a reserve game. At the start it is hard because you are sitting without being able to do too much work, but recently I've been able to step it up in the gym, and on the grass, which is much better."