Rotherham United manager Paul Warne says the ‘ball is in the court’ of Jonson Clarke-Harris to build on his finish to the 2016/17 season, as the club prepares for life in League One.

The Millers forward has been handed a one year extension to his deal, which was set to run out in the summer, and Warne is keen to see the former Oldham Athletic and Peterborough United man continue to display an appetite to improve after a strong finish to the current campaign.

“He's had an unfortunate season and he's been out all year with his knee. I spoke to him and told him what I expected from him on and off the training ground and the pitch,” Warne told www.themillers.co.uk.

The ball is in his court because a fit Clarke-Harris is a handful against anyone. I think he's done well in a couple of games, but I think he has a lot more to give and I think he will give a lot more because if he buys into what we're doing in the summer, he'll have to.

Warne continued to add that he has been pleased with how Clarke-Harris has received the various chats that he and his coaching staff have had with him regarding their plans for next season and admits that he hopes the stability of being under contract with the Millers next term will give him confidence ahead of a big summer for the club. 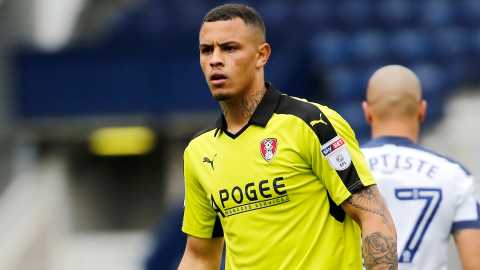 “I'm looking forward to working with him again. I've always had a pretty open relationship with Jono and I think he's come on a lot at the end of the season but he's got a hard summer ahead of him,” he explained.

“Me and Richie sat down with him for a good 40 minutes the other day and told him if he wants to be here, he's got to buy into this and he did, so I was pleased with that.

“I presume it will help him and he'll go into the summer knowing that he is here next year. If he is injury free then he will be a massive handful in League One, so that's the aim. We need to get him in great shape in the summer so he can play 35-40 games for us.

“He'll have a little bit of down time first for a couple of weeks because he's spent a lot of time in the gym this year. When he comes back, all of them get treated a little bit differently, but for the first couple of weeks it's pretty generic. We need to do some work with him as well, it's just not the physicality, and it’s where we want him on the pitch at certain times and what we expect from him.”

The Millers boss reiterated that the short-term nature of the deal could be addressed early next season should Clarke-Harris hit the ground running, but explained that the decision was to ensure that his forward begins 2017/18 with a desire to prove his worth.

“I said to him, it's a risk from the club's point of view giving him a one year deal and if he scores 20 goals he might be gone by January, but if he starts really well, we'll sit down and sort out a better contract,” Warne added.

“Like I said, the ball is in his court. I don't want to give out long contracts because I want to keep people on their toes and with Jono especially, there is a risk with his knee, so he needs to keep on top of that.

“There's his responsibility and there's his motivation, so that's why I've done it the way I have."