Pre-season has already started for Jonson Clarke-Harris as he looks to forge ahead with his Rotherham United career after agreeing terms on a new one-year deal.

The 22-year-old agreed a fresh deal with the Millers after successfully overcoming a serious ACL injury which ruled him out of the vast majority of the 2016/17 season.

The ex-Oldham front-man battled back to play a part in the final two months of the campaign, impressing sufficiently to be offered new terms by the Club.

Now the Leicester-born powerhouse says the hard work has only just begun, as he looks to work hard over the close season to be in a position to compete for a first-team berth next season. 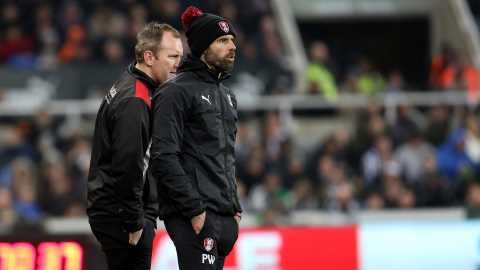 “I am delighted that I am extending my stay here for another year,” Clarke-Harris told www.themillers.co.uk

“For me if next season could start tomorrow that would be great. I'm really raring to go.

“I feel now that I have a year to prove myself because obviously this year I have virtually been out all season.

“Whilst I’ve been out, I’ve grafted, I’ve worked hard and that will continue during the off season now so I can come back fitter and stronger for next season.

“Playing 90 minutes was a big boost on Sunday. The knee feels strong now, I feel strong, and I also feel like I'm improving technically. I am looking forward to the next season, and hopefully there is some success to follow.

“It was really unfortunate for me that the season had to end so soon. That was my first 90 minutes in over a year so I did start to feel it a little, but it was a big step forward and I now need to ensure that I build on the progress made.”

After joining the Millers from Oldham in 2014, the striker has shown flashes of his potential which was stalled by injury during pre-season.

The ex-Coventry and Peterborough marksman says there will be no resting up during the close season, stating he is already working back in the gym has he looks to make up for lost time for the start of pre-season.

“There is plenty of work to do. I will be back in the gym almost straight away to continue with my strengthening programme, because I know that if I don't I will be struggling to get back. That is my main focus now, I have to keep myself ticking over so that when I come back I'm ready for whatever pre-season has in store."