Warne has already stated he is close on three fronts, with news expected shortly as he looks to add to his close season capture of defender Michael Ihiekwe.

Should he complete deals for the three players he is in talks with, Warne says he will then look to add another two signings to complete his summer recruitment, stating that strikers are right at the top of his current manifesto. 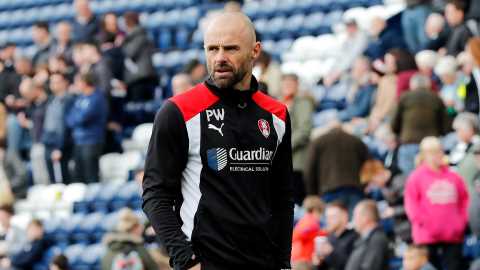 “I am still looking for some more firepower at the top of the pitch,” Warne told www.themillers.co.uk

“I have worked out that I will need around 70 goals to get into the top six, so I am trying to work out what I've got in my team at the moment. Ideally everyone is looking for that 25 goals a season striker, which we have attempted to get, but obviously that isn't easy.”

Warne, who stated on Thursday that he is currently in talks with a striker and two midfielders, has made no secret of his desire to strengthen at the top end of the pitch.

Last season he was heavily reliant on top scorer Danny Ward, after Jonson Clarke-Harris missed almost the entire season with an ACL injury.

Warne wants to avoid a repeat of last season’s dearth, but is acutely aware that goalscorers are coveted individuals.

“Even if you had an unlimited pot of gold and I said to you now get me a number nine who can get me 25 goals, the list would still only be around three or four,” Warne continued.

“It is not easy. We are making no end of phone calls, and talking to players, and we are really trying to get them to buy into what I believe.

“I am being honest with them. I believe that this club is a great club, I believe that with everything going on behind the scenes it is a lot stronger than it was this time last year. I am looking forward to a clean slate and really having a go and being judged for what I've done this year.”