Rotherham United manager Paul Warne hailed the contribution made by departing striker Danny Ward after the front-man secured a move to Cardiff City.

The Millers boss has always enjoyed a close relationship with the former Huddersfield striker, who joined the Millers from the Terriers in 2015. 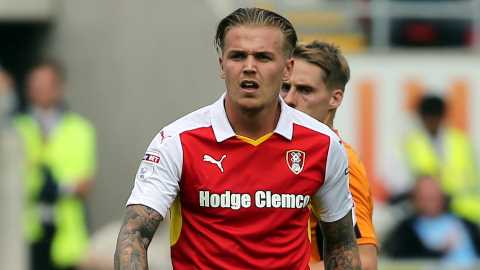 Warne told www.themillers.co.uk that the 26-year-old goes with his blessing after remaining with the Millers despite heavy interest in the January transfer window.

“I know he will go on to have a great career. He has done really well for us, and we thank him as a club for his contribution,” said Warne.

"He came back last pre-season in really good shape, and I could tell then that there was a real fire in his belly to perform last season. For me there was no surprise to see him go on and have the season he had.

"He is at a good age, and Cardiff have certainly got a good pro.

"He will be sorely missed, but obviously it is a great opportunity for him to continue playing in The Championship. He goes with my thanks and blessing.

"There was lots of interest in him during the January transfer window. We told him we needed him here, and whilst some pros would sulk, he stayed dedicated to the cause. His commitment was there to see when he played with a broken wrist for a while as well. He gave us everything he had, and I appreciated that.

"He had a great season in difficult circumstances. He was always one of the first names on the teamsheet. He will be missed, but we move on, and things are in place with other strikers to fill the void.

"I'll keep in contact with him and maybe our careers will meet again in the future.”