It isn’t every professional footballer’s highlight, but Rotherham United defender Richard Wood insists he is already looking forward to what is expected to be a tough pre-season.

Boss Paul Warne, the Millers former fitness coach, has spoken at length about his desire to provide a robust pre-season camp with the Millers set for a week in Austria in the middle of July.

Whilst all pre-season camps are tough, there has been a real emphasis by Warne on early starts, hill runs and late finishes, but Wood has welcomed the prospect of a no holds barred camp as he prepares for the squad return at the end of this month.

“I'm looking forward to it,” Wood admitted to www.themillers.co.uk

“The manager has explained his plans for pre-season and it's going to be tough, but it'll be enjoyable and it looks like we'll be a really fit team, which is what you need in League One.

“We need to be fit, aggressive and play at a high tempo, which I think suits Rotherham's style, how we are and what Warney wants to do.”

Wood put pen-to-paper on a new one-year deal with the Millers last month, and joins Joe Mattock and Jonson Clarke-Harris in agreeing fresh terms at the AESSEAL New York Stadium. 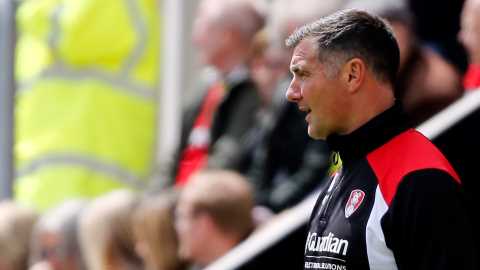 The former Sheffield Wednesday and Coventry defender is already planning for next season by making sure he comes back to Roundwood this month in good shape, as he aims to play as many games as possible in what looks set to be a competitive area of Warne’s side.

“We've got off-season programmes to be doing, so when we go back in pre-season we'll have a good base of fitness and be raring to go.

“It is a one year deal I’ve signed so I want to make sure I play as much as possible and help the team this year. The aim is to hopefully get promoted and if we can do that, then there will be a good chance I'll be signing another new deal at the end of it.”