Skip to main content Skip to site footer
Apologies, this video is unvailable.

New Rotherham United recruit Darren Potter insists he will be calling upon previous experience in English football’s third tier to help his new club return to the Sky Bet Championship as early as possible.

The 32-year-old midfielder enjoyed promotion with his previous employers Milton Keynes Dons and turned out 41 times for the stadium:mk-club last term and admits he will be hoping to emulate that feat whilst in South Yorkshire.

After putting pen-to-paper on a two-year deal at AESSEAL New York Stadium, Potter admitted the vision of the staff, which includes former colleague Richie Barker, was a big factor in his decision to join the Millers.

“I'm delighted. It's been a bit of a strange summer being out of contract and not knowing what you're doing next, so to finally have something in plan now is great,” he told www.themillers.co.uk.

“Richie was a big influence and I've made no bones about that. We worked together at MK for two-and-a-half seasons I think it was and he told me a lot about the club and the manager here and that it would probably be a good step for me to take next. 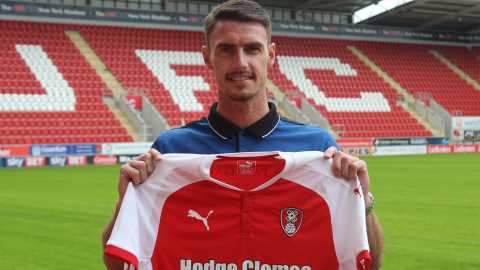 “He's told me about the philosophy that they're looking to implement here going forward.

“Obviously there is going to be a lot of change with Richie coming in and being part of the staff and maybe after the last season players will be leaving with new players coming in and I think it will be an exciting challenge.”

Potter is confident following talks with members of the first team staff that his new side can mount a strong challenge for an immediate return to the second tier and is hopeful that he can use his vast experience to help his new teammates along the way.

“I would like to hope so and I sure that is the objective from the conversations I've had with the staff,” he continued.

“It would be nice if we could bounce back straight away after the season last season and that will be the aim, so I'm looking forward to getting started.

The Liverpool-born operator continued to express that he is keen to let his football do the talking, as he introduces himself to the Rotherham United faithful as a home player, having previously only lined up in the opposition ranks at AESSEAL New York Stadium.

“I'm not somebody that likes to speak about myself, so I'll leave that to other people but hopefully people will enjoy the style of football I like to play,” Potter explained.

“I like to get the ball down on the park and pass it around and hopefully you'll see plenty of that.

“It's a fantastic stadium and it's one of the newest as well. I've been here a couple of times already so I've played in front of the crowd before and I'll be delighted to play in front of the home crowd now.

“I've been free from injury for a very long time and not suffered many throughout my career and I've got a lot of games and experience under my belt.”