New signing David Ball says the enthusiasm of the staff surrounding the chase to bring him to the club was the main factor in him moving to Rotherham United.

Despite a successful campaign with Fleetwood which saw the ex-Manchester City striker net 14 times as the Cod Army reached the play-offs, Ball was swayed by the plans being made by Paul Warne and his staff at the AESSEAL New York Stadium.

Ball became close season signing number four when he penned a two-year deal last week, and he revealed that the club’s ambitions matched his own as he agreed to a move across the Pennines. 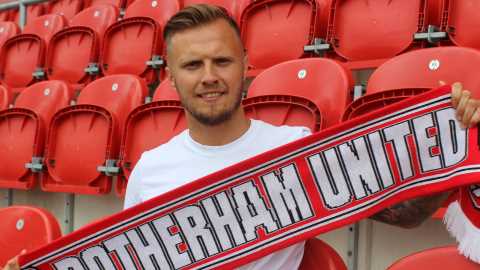 "He just excited me,” Ball said of his new boss Warne.

“He is a really honest man. He tried his hardest to bring me here and that had a big impression on me. Everything he wants to do in pre-season and what he wants to do during the season all tick the boxes of how I see myself with Rotherham United.”

Warne stated on Ball’s arrival that he expects the former Peterborough operator will provide a creative spark that he has been looking to recruit throughout pre-season.

The 27-year-old says that he will look to bring goals and assists from a variety of positions, with his first competitive outing for the Millers set to be a return to his former club on the opening day.

"It was good to get a few goals,” Ball added on last season.

“I also got a few assists too. I think that is what I will hopefully bring to the team. Some creativity, but also chip in with some goals as well.

"I am someone who likes to create. My goals are mixed to inside and outside the box. I will work hard for the team, and the main aim is that the team get the three points.

"Over the past few seasons I have played centre-midfield. I have played as a number 10, up top and across the sides. I think I'll bring that versatility to the team but I want to come here and play in my main position to get the goals to get us to where we want to be.

"It is a great place to play, I will be excited to come and play here every week. I seem to remember scoring a few years back when I played here, I really cannot wait to get going.”