Ball is the latest name to tie his future to the Millers after putting pen-to-paper on a two-year deal at the AESSEAL New York Stadium.

The ex-Manchester City schemer has played a major role in the rise of Fleetwood Town in recent years, scoring 14 goals in the Cod Army's run to the League One play-offs last season.

Now the 27-year-old is seeking a new challenge at AESSEAL New York Stadium, with Warne eluding to Ball's X-factor in the final third as a big pull in his arrival.

"He is an attacking player who can play behind the front or in a two," Warne told www.themillers.co.uk

"He is at a great age for me. He is athletic, he is committed and he wants to improve. He is a good kid, all my research came back really positive. I had to use my ultimate charm on him but after speaking with him he was keen, and I am really pleased to get him over the line. 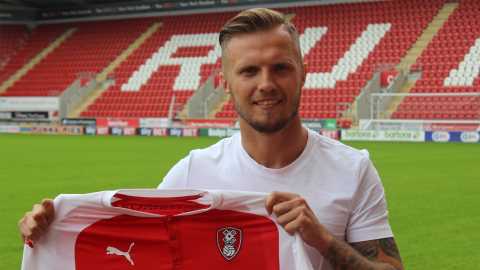 "I think we have lacked a little bit of creativity up top and I think he'll give us that. He will obviously give us goals as well, but he is a good link from the middle to the top of the pitch and I think we just need that spark in the team.”

Warne was again meticulous in his selection of Ball after consulting with a host of contacts before talking with the player.

Ball, who is a former team mate of several inside the Millers’ camp, again showed up well in a number of key Warne areas, with the Millers boss receiving a glowing reference from all quarters.

"I spoke to some of the lads who have played with him and people who have worked with him,” added Warne.

“They highly recommended him as a human being. When I spoke to him he told me he was the head of the fine systems. I know his attitude to training and the games that he has played. I have seen him play, I've seen his athleticism and I knew he was an ideal fit for me. Like I said I feel that he has a little more class than what we had before.”