Emmanuel is the second player to leave Ipswich Town to join the Millers on loan after Kieffer Moore signed at the start of this week.

Both have signed season long loans with the Millers, with teenager Emmanuel already greatly impressing his new boss following discussions prior to the move. 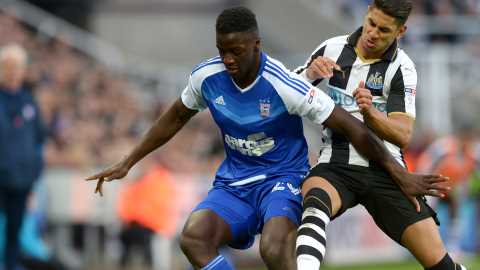 "He is a really good kid," Warne told www.themillers.co.uk

"He's had a good upbringing, he is down to earth but really wants to improve his game. Andy Liddell at Ipswich and Kieffer have told me he is a really good lad. He is a humble kid. He feels privileged that he was born with an ability to do something he enjoys doing. He wants his career to go all he way to the top, which at 19 why shouldn't it. If he comes here and has an amazing season with us then he will no doubt go on to bigger and better things."

Like Moore, Warne confirmed that he was impressed with the London-born right-back after he played for the Tractor Boys against the Millers at the end of last season.

After starting his youth career with West Ham, the 19-year-old signed for Ipswich in 2015 and played 17 times in all competitions during the last campaign.

Now Warne expects him to kick on again, revealing that he is flying out to Austria where he could play in Saturday's game with Soproni VSE.

"He played against us at the end of the season and I thought he did well," Warne added.

"He is a dynamic, strong athlete who gets up and down the pitch. I've seen him play a few times, I've spoken to Lidds, and obviously Mick McCarthy, and I know they like him.

"He's signed a new deal at Ipswich, he's only 19 so it looks like he has a good career ahead of him. He is a really humble kid. I spoke to him on the phone and he's a really polite lad. I've said it a number of times that I feel better human beings make better footballers, and they are the people I am bringing in.

"I don't want to have loads and loads of loans, Josh and Kieffer will be my two loans for the moment. I have a good group of players, and I have two in every position which I am really happy with. There is good competition for places and they are all really fighting for a jersey.

"There is a good chance he'll play Saturday. He's playing out to Austria tonight. He'll train with the squad tomorrow and I reckon he'll play a part on Saturday in some way."