Moore has joined up with his new team mates out in Austria as the Millers were put through their paces on day one of their week-long stay at Lindabrunn.

The former Yeovil and Forest Green front-man looks set to play a part for the Millers against Floridsdorfer tomorrow, after scoring at the weekend for Ipswich on their 5-0 win over Drogheda before flying out to Austria. 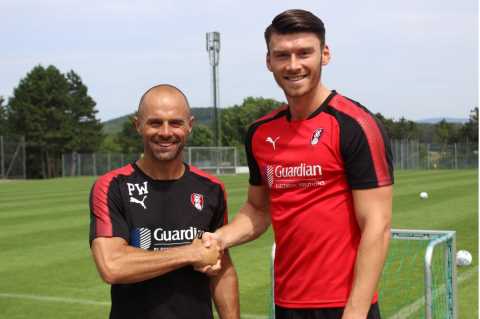 "We are delighted to bring Kieffer into the club," Warne told www.themillers.co.uk

"He played against us last year and did well. We spoke to a few people about him and it was all good news. He has got some amazing attributes. He is really keen and ready to learn. He is very athletic and very strong and it is another striker to add to our attacking force.

"Kieffer's arrival now gives us more options. I have always said the more strikers and the more competition I can get up front the better. He will play a part in the game tomorrow night and I look forward to seeing how he shapes up."

Moore took part in training today as the Millers begin their week in Lindabrunn which includes two friendlies before returning to English shores on Sunday night.

Warne again revealed that the deal wasn't just done on Moore's ability on the field, with the Millers boss again reiterating the 24-year-old showed all the right characteristics to fit in with his new squad.

"I am really happy that he decided to come to us, he has come out to Austria and he has got on with the lads straight away," Warne added.

"He flew straight out here from Dublin to join up with us, where he played for Ipswich and scored for them on Saturday. I really liked him when I saw him play and when I met him I liked his attitude. He is another positive kid to have around the place. He wants to come here and help us, he has plenty of ability and I really like the way we are shaping up now up top."