Settling into life with Rotherham United should be no problem for new signing Josh Emmanuel.

The attacking right-back is one of seven new faces to come through the door during the close season, and he has checked in with his new team mates after arriving at the club's training headquarters at Lindabrunn Sportschule in Austria. 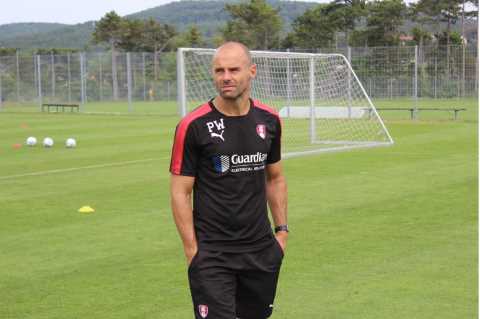 SIGNING | Josh will fit right in with the Millers - Warne

One of the many benefits of a pre-season tour is the bonding amongst team mates new and old, something that boss Paul Warne was keen to build after stressing the importance of a tight unit, which he experienced over many years during his playing days with the club.

With Emmanuel flying in to Austria yesterday evening, he was up and out for today's 7.30am hill run, lining up alongside fellow Ipswich loanee Kieffer Moore.

Whilst Warne acknowledges the importance of a familiar face, he expects Emmanuel to slip seamlessly into what is becoming a very close knit group.

"It is always nice if you go somewhere and you know someone," Warne told www.themillers.co.uk

"He seems a pretty articulate and confident kid, so I think he'll make friends really easy because it is a great group.

"There is no-one in this group that you can't say isn't a great human being. I think he'll settle in really well, the lads have bonded really well out here so he has been welcomed with open arms.

"We were well aware that we needed some more strength in that position, so I think Will Vaulks will probably sleep much easier now knowing that Josh is through the door."

The Millers are now into day five of their pre-season tour, with a double session and classroom session planned for the day, ahead of tomorrow's second tour fixture against Soproni VSE at the club's headquarters at Lindabrunn Sportschule (5pm local time, 4pm GMT).