The striker today joined the Millers for an undisclosed fee from Bolton Wanderers to become Warne’s fifth summer recruit. 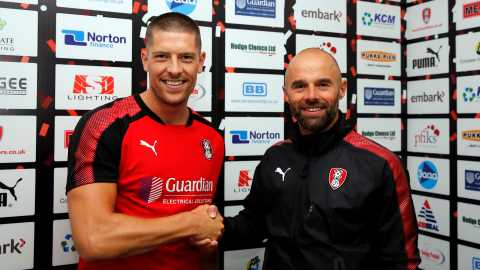 After spells with the likes of Preston, Swansea, Crawley, Fleetwood and Bradford under his belt, the Lancastrian already boasts a strong CV, but Warne is confident that there is more to come from the 25-year-old who he believes has all the attributes to be successful with the Millers.

“I have been looking at strikers for a while,” Warne confirmed to www.themillers.co.uk

“For the way we want to play we do need a target, someone up top who can bring other players into the game.

"He is a hard working lad. I told him that I felt that he has underachieved so far in his career with what he has got in his locker. I think that I can get more out of him, and if he buys into what the coaches and I are going to do here then we'll have a fantastic player.”

Proctor began his career with his home town club, and the form he showed for Preston alerted the attentions of a number of Premier League clubs resulting in a switch to Swansea City.

He has since enjoyed productive spells at League One level with the likes of Crawley and Fleetwood, where his presence and work rate has seen his new manager liken him to a previous Rotherham United success story.

"Strikers have always done well at this club and gone onto good things, so that is the motivation he needs to come here,” Warne maintained.

"The effort he puts in is similar to an Alex Revell. He'll run hard for the team, he is physical and I think he'll be a really good addition to the team.

“I told him if he comes here, works hard and does well then the fans will love him. The goals will be the cherry on the cake.

"I'm really pleased to get him because I think that your team is only as good as your strikers. He can come in and compete with the likes of Bally (David Ball), Jono (Jonson Clarke-Harris), Yatesy (Jerry Yates), Dexter (Blackstock) and potentially one other. I want competition for places but even more so up top.”