Players are returning at just the right time for boss Paul Warne as his Rotherham United side prepare for four games in 10 days.

The Millers host MK Dons tomorrow afternoon at AESSEAL New York Stadium before an away day double-header against Bury and Walsall.

With a New Year’s Day hosting of Blackburn Rovers also the menu, Warne knows he will more than likely have to rotate his squad to get through the festive period. 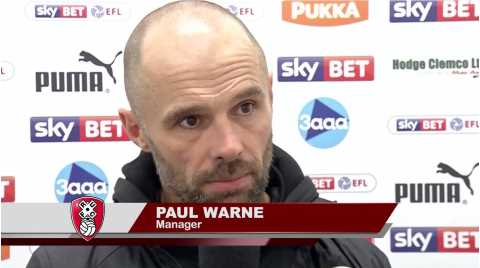 FREEVIEW | Warne has decision on defence

The Millers boss has been bolstered in recent weeks with the return of trio Lee Frecklington, Joe Newell and Ben Purrington, and Warne acknowledges their presence comes at just the right time.

“With so many games coming in quick succession I am really pleased that we have got players coming back,” Warne told iFollow Millers.

"Come the turn of the year I will be close to having a full echelon of players available again. We are still missing Procs, which has been big for us, but generally we have done well with injuries this year. The lads have kept themselves in good condition and that has made selection harder, which is what we want. I will be amazed if any manager in this upcoming 10 day period puts out the same 11 in all four games. In that respect I am going to need all of them.”

The Millers are without suspended duo Richard Wood and Kieffer Moore tomorrow, but both will be available again for Boxing Day.

READ | Character there to see - Will

Warne successfully moved Will Vaulks to central defence following Wood’s dismissal last weekend, and now faces a decision on whether to stick with that formula or choose an alternative.