The former Millwall and Reading defender has agreed a one-year deal to become Warne's eighth summer signing, after the Millers boss took careful consideration over whether to bolster his defensive options.

Warne invited the 28-year-old to initially train with the Millers, even though he already knew he was what he was looking for to help compete with Josh Emmanuel for the right-back spot.

The Millers boss used the time on the training ground to perform a character assessment, as he looks to maintain the feel-good factor surrounding the Millers' Roundwood training base.

Cummings passed the examination, with Warne stating again that his latest addition ticked all the important boxes that he is looking for in a Rotherham United player. 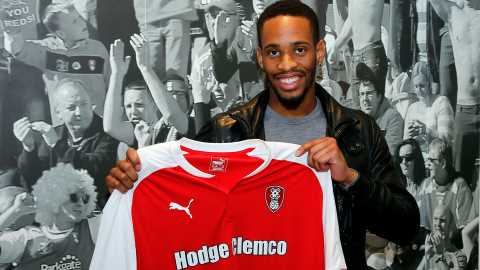 "He agreed to come up before we signed him and he trained with us for a few days so we could get to know him a little better," Warne told www.themillers.co.uk

"I liked what I saw, we need to get him fitter obviously but he will play a part going forward.

"He is a really good kid, the lads like him and he has slotted into the club really well.

"The fact that he was willing to come up and just train initially, with nothing on the table, with the clubs that he has been at was testament to his character. He has done well in training, but we can see that there's more to him as he gets fitter. Once he is fit, he will be competing for a place.

"He wasn't going to be as sharp as the lads, it was more of a character test than a footballing test. I had seen him play, I just needed to know if he would fit in here. Coming up from London, would he be happy being away from his family, and would he suit us. I wanted to make sure it was a win win for both parties, and it was."

Cummings boasts a wealth of experience, with a number of games under his belt at Championship and League One level.

He also tasted Premier League football with Reading after helping them to the Championship title, and has also represented Jamaica at international level.

He played a significant proportion of games for Millwall as they achieved promotion from League One last season, and Warne believes that the experience could be key to the Millers going forward.

"He is experienced at this level and he has played higher," Warne added.

"He played a good chunk of games for Millwall last season who then got promoted, so he knows the league and what is required to be successful. He is the type of player who I have been after all summer. He is very athletic, but he is also a tough defender.

"We needed some strength in that position, so I am delighted to sign him.

"I watched games that he played in last year, so I already knew what he could do at a competitive level. It was more the fact that when he came up I knew that he hadn't had a competitive pre-season like the one we have had. We will work with him to get his fitness up, and then he'll be in a position to compete for a place."