Rotherham United boss Paul Warne has thanked the Millers faithful for the feel-good factor sweeping through the club ahead of the season curtain raiser against Fleetwood Town.

After presiding over a pre-season which has seen seven new arrivals, Warne has also called on his previous experience as a player as he tries to recreate the spirit of old, which formed the bedrock of success in the late 90s and early 2000s.

With a firm emphasis of adding players that will embrace the values of his Rotherham United, Warne has made an effort to further enhance the relationship between player and supporter.

With the big kick-off now just three days away, Warne has thanked the ‘Red and White Army’ for buying into his new look ethos, with a sell out away following at Highbury set to be right behind the Millers.

“We have sold out away from home for the first game which is fantastic from the fans,” Warne told www.themillers.co.uk

"I know that lots of fans have spoken to the players in and around the town, wishing them all the best. Everyone is in a positive mood, and I think that having the likes of Richie, Polly and Breck around, plus the new staff, it feels like a fresh new club this year. The support from the fans has been great.”

The Millers have sold close to 6,000 season tickets for the upcoming campaign, with the first home game against Lincoln City in the Carabao Cup approaching on Tuesday night.

With new signings Jamie Proctor, Kieffer Moore and David Ball all weighing in heavily on the goal front in pre-season, a wave of optimism amongst the Rotherham fan base has caught the attention of Warne as he looks to create a fully United front for the new season. 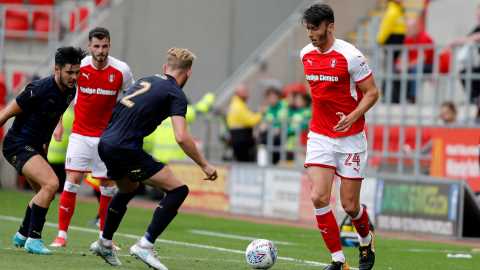 “I read Kieffer's article the other day, and he said just how good the fans have been with him, and that really helps the new players settle in,” he added.

“I am trying to build this One Club, One Community, One Town mentality, and it feels like everyone is pushing for us to do really well which is great.

“It feels like everyone is behind us. It is creating a really good feel-good factor which will be crucial. We won't be judged by this one game at the weekend but we want to start the season well, and the fans are a major factor in that.

“I know the fans will get behind the team and I know if the players give you 100% that you will be proud of them. Win, lose or draw - we are in it together.”