Rotherham United manager Paul Warne has confirmed that he will make changes to his side ahead of tomorrow's Carabao Cup second round tie against Huddersfield Town.

With the Premier League high-flyers expecting to make changes to their side too, Warne admits that he will look to adjust his 11, with a home game against Charlton Athletic on the horizon this weekend.

Whilst happy to give minutes to some members of his squad who haven't been regular this season, Warne insists that whoever gets the nod, it will be a strong Rotherham line-up.

"I fully trust my squad, so I have no issue in changing the whole 11 if I choose," Warne told iFollow Millers.

"I don't dispute that it will be the same for Huddersfield, I expect them to make changes. I think if the game would have been on the Tuesday I would have been tempted to make fewer changes, but it is on a Wednesday and we have a big home game coming on the Saturday against Charlton. I am happy to freshen it up, and the lads who have played a lot of minutes will probably have some down time." 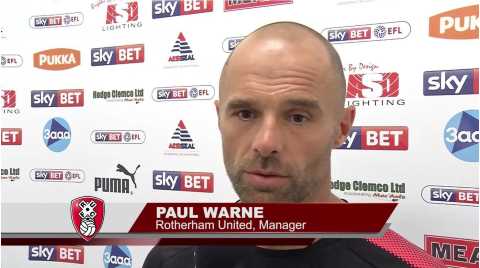 Warne still has one absentee, with young striker Jerry Yates not fit enough for consideration, but aside from the 20-year-old, Warne confirmed he has a full squad to choose from.

"Jerry won't be available for this game but the physios are telling me that they are really pleased with his recovery," he added.

"I don't know if the weekend will be too soon for him, but he is getting closer and closer I do know that.

"They (the team overall) are physically in a very good way at the moment, so in that respect we have a full echelon of players to pick from again, so from that respect I am a lucky man."