Rotherham United manager Paul Warne could have the prospect of a fully fit Darren Potter available as the Millers host Lincoln City in the Carabao Cup first round.

After suffering illness at the start of last week, the experienced midfielder was left on the bench at the weekend at Fleetwood.

Warne says that the former MK Dons playmaker is now fully fit and is in contention for a start as the Millers host Danny Cowley's side this evening. 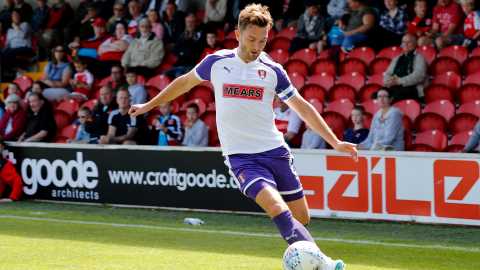 "Darren had been ill for the first three days of last week, and the way we want to play we cannot carry players if they are ill for obvious reasons," Warne told iFollow Millers.

"He is back now though and should be in contention for tonight's game.

"He has the best distribution in the team and he was a big part of our success in pre-season. He has been excellent since he has been in the door, but we have a good competitive squad here and if anyone is missing I can go with someone else. He was a miss Saturday, but that wasn't the reason we lost the game."

Warne confirmed that winger Alex Bray won't be risked for tonight's encounter, as he looks to have the ex-Swansea ace ready for the weekend game with Southend.

"I have no issues at all from Saturday," Warne added.

"I am nearly picking from a full squad.

"Alex (Bray) needs a few more days of training to get him right. I have a plethora of wingers as well so it isn't like I need to rush him back. He'll have a few more days training and look to contest to be involved at the weekend."

Kick off at AESSEAL New York Stadium is 7.45pm this evening.