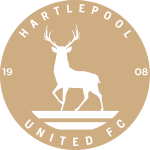 Millers fall to defeat at Hartlepool...

A young Rotherham United reserve team slipped to a 2-0 defeat at the hands of Hartlepool United at Victoria Park on Tuesday afternoon.

First team/development coach Matt Hamshaw took charge of a side consisting of a number of young professionals and scholars, with the experience provided by left back Ben Purrington and goalkeeper Lewis Price.

There was nothing to separate the sides at the interval in the north east with the Central League clash goalless at half time, but a neat finish from Jon Weirs and a Liam Travers header ensured that Pools recorded victory in the second string outing.

The Millers best openings in the early exchanges forged chances for Joshua Kayode and Trialist, but the former headed wide before some good goalkeeping from Ryan Catterick denied the latter after a mazy run into the box.

Hamshaw’s side had Price to thank for the scores remaining level shortly after the restart as the former Sheffield Wednesday stopper produced a fine save to turn Jack Blackford’s effort around the post.

Soon after the hosts did manage to beat the Millers stopper and Blackford was involved again, this time as provider, after a burst down the left allowed him space to cross for Weirs, who expertly steered it into the bottom corner to make it 1-0.

A long range drive from Trialist almost saw the visitors restore parity on a chilly afternoon at Victoria Park but Catterick’s fine save at full stretch prevented his drive from finding the back of the net.

However, another cross provided a second goal for Hartlepool when young forward Travers met the delivery with a timely header to beat Price and double his side’s advantage.