The AESSEAL New York Stadium was rocking as Sunderland became a heavyweight victim of Rotherham United's recent rich vein of form, in Sky Bet League One.

The Millers leapfrogged the Black Cats in the table with a rampant display in front of goal, which left Lee Johnson’s men shell-shocked at times.

Braces from Michael Smith and Freddie Ladapo, along with Michael Ihiekwe’s header, gave the Millers their fifth league victory in six games, to help them keep pace with the divisional pacesetters.

Boss Paul Warne was forced into a solitary change to his starting line-up, following their handsome victory over Milton Keynes Dons, last time out.

Northern Irish striker Will Grigg was ineligible to face his parent club and Ladapo was rewarded for his goalscoring cameo at Stadium:MK by being paired alongside in-form Smith.

Smith was in the thick of the early action when he won a free-kick near the corner flag, but Shane Ferguson’s resultant near post free-kick was headed clear by a Sunderland defender.

Rotherham had the better of the early exchanges and firstly Wes Harding’s long throw was only half-cleared into the path of Dan Barlaser, who volleyed narrowly over the bar before Ladapo got the better of Tom Flanagan to dart into the box unchallenged, to plant a cross which fell invitingly for Chiedozie Ogbene, at the far post. The Irish winger cut inside with purpose, but his low shot was blocked at close quarters, by a retreating visiting defender.

However, Warne’s side were deservedly rewarded for their fast start, by breaking the deadlock in the tenth minute.

The Millers teased and probed the Black Cats box and Ferguson injected pace into the home move by clipping the ball forward into the left channel and Ben Wiles dug out a cross which was latched upon by Ladapo, who cleverly hung up a cross with his weaker left-foot, and Smith, who had ghosted away from his marker, expertly steered a header into the far corner of the net, giving Thorben Hoffman no chance in the visitors’ goal.

The Millers came close to a second goal when Barlaser swung over a free-kick which had Hoffman grasping at thin air, as both Rarmani Edmonds-Green and Ihiekwe narrowly failed to make a telling headed connection – with both players requiring treatment, in the aftermath of the move.

Lee Johnson’s side failed to make an impression, until the 20th minute mark, when Elliot Embleton cut inside before trying his luck from distance but Harding bravely put his head in the way, to divert his effort to safety, before a lively Ogbene was denied by the strength of Sunderland numbers, at the other end.

Despite being second best to date, Sunderland managed to get themselves back on level terms on 24 minutes, in a goal which had a whiff of controversy.

Rotherham were pouring numbers forward, and with firstly Ollie Rathbone and then Ogbene, left grounded, following hefty visiting challenges, no action was taken by the referee, who played advantage initially, despite home protests and Sunderland swept up field in the blink of an eye and Dan Neil’s pass saw Ross Stewart find himself in a one-on-one situation with Edmonds-Green, and the Black Cats marksman, showed fleet of foot to work a yard of space on the Huddersfield loanee, before drilling a low shot, which appeared wrong foot Josh Vickers, as it found the bottom corner of the Rotherham net.

The Millers responded positively to the setback and a lovely flowing move involving Rathbone and Smith ended when Ogbene put in a delicious cross which narrowly evaded a number of Rotherham runners before Ferguson skipped to the by-line to put in another inviting centre which was scrambled clear by the visiting defence.

Minutes later, Ihiekwe headed into the grateful hands of Hoffman following Barlaser’s centre before Luke O’Nien became the first to see yellow for a late challenge on Wiles on halfway.

Rathbone became the next to threaten the Sunderland goal with a rasping shot from distance which narrowly cleared the visiting crossbar before Smith’s looping header was plucked out of the sky by Hoffman.

However, Rotherham were not to be denied and they regained the lead four minutes before the break.

Smith showed his determination by stripping Callum Doyle in possession, and Rotherham continued to press before Rathbone threaded a pass into the channel. Smith then showed his clever footwork, by delivering a tantalising centre into the danger area and with Hoffman and no Sunderland defender in a position to intervene, Ladapo had got on the wrong side of his marker, and he managed to scuff the ball in, with his standing foot, from close range.

The Millers’ joy almost proved short-lived, though, as Sunderland came within a coat of paint of a second equaliser when Stewart drilled a low effort which smashed against the foot of the post, before Aiden McGeady was denied on the follow-up, by a well-stationed Harding.

There was further drama to come in stoppage time, and Rotherham could easily have gone into the break with a two-goal advantage.

Wiles’ ball paved the way for Ogbene to plant a lovely cross, which looked inch-perfect for Ladapo, who found himself in acres of space, but the Millers striker failed to trouble the target with his downward header, despite having just Hoffman to beat.

The Millers were quick out of the blocks at the start of the second half and after McGeady was cautioned for a foul on Ogbene, the jet-heeled Millers winger left two Sunderland defenders in his wake, to find Ladapo, whose clipped shot was straight down the throat of Hoffman.

Moments later, Barlaser’s arrow-like shot had Hoffman rooted to the spot, as it agonisingly flew just inches wide of the target before Ladapo looked set to turn the ball home from point-blank range until Doyle’s superb last-ditch tackle.

The Millers were going for the jugular, and it was no surprise, when they added a third goal, just eight minutes into the half.

Ogbene was proving a thorn in Sunderland’s side, and after another menacing run was halted for a corner. Ferguson, after some deliberation about the placing of the ball, planted a delightful centre into the business area, and Ihiekwe emerged from the masse of players in the box, to nod the ball into the roof of the Sunderland net.

The AESSEAL New York Stadium was now at fever pitch, and the decibel level went up further, just three minutes later, when Sunderland were reduced to ten men.

Sunderland were struggling to contain Ogbene, who looked threatening everytime he received the ball, and McGeady’s frustration boiled over when he hacked down the home winger, and the referee had no hesitation in brandishing a second yellow-card to the Sunderland skipper, who left the scene in disgrace, following a melee involving both sets of players.

The visitors had lost their composure and sub Corry Evans joined him in the book for a late clip on Wiles. Stewart was fortunate to escape sanction for a similar looking foul on Ogbene before Smith found himself in hot water, by kicking the ball away, to see yellow, also.

However, Smith, soon redeemed himself, by claiming Rotherham’s fourth goal, to rub salt into Sunderland’s wounds.

There looked little danger for the Black Cats until Edmonds-Green swung over a delicious cross from the right flank, and Smith showed his aerial prowess, by heading home from close range, in what must have been a sweet moment for the self-confessed Newcastle United supporter.

With the game as good as over and with many of Sunderland’s noisy travelling contingent heading for the exits, Warne made a triple substitution with Smith, Ogbene and Ferguson leaving to a standing ovation.

Both Miller and Kayode headed narrowly wide before the Millers added gloss to the scoreline with a fifth goal, late on, when Hoffmann dwelt in possession, and sub Joshua Kayode nipped his pocket, before calmly sliding the ball across goal, and Ladapo had the simple task of firing into an unguarded net. 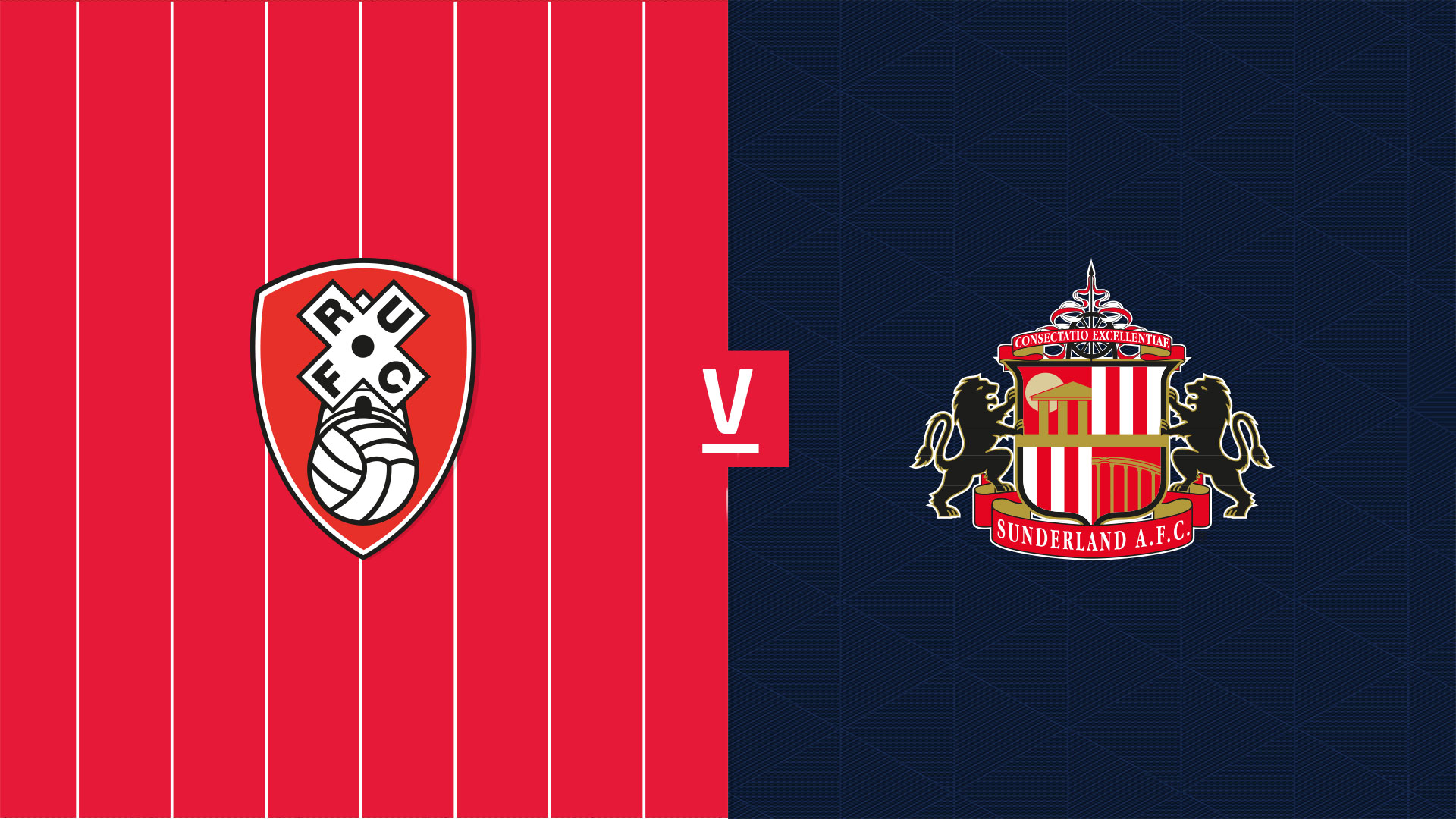 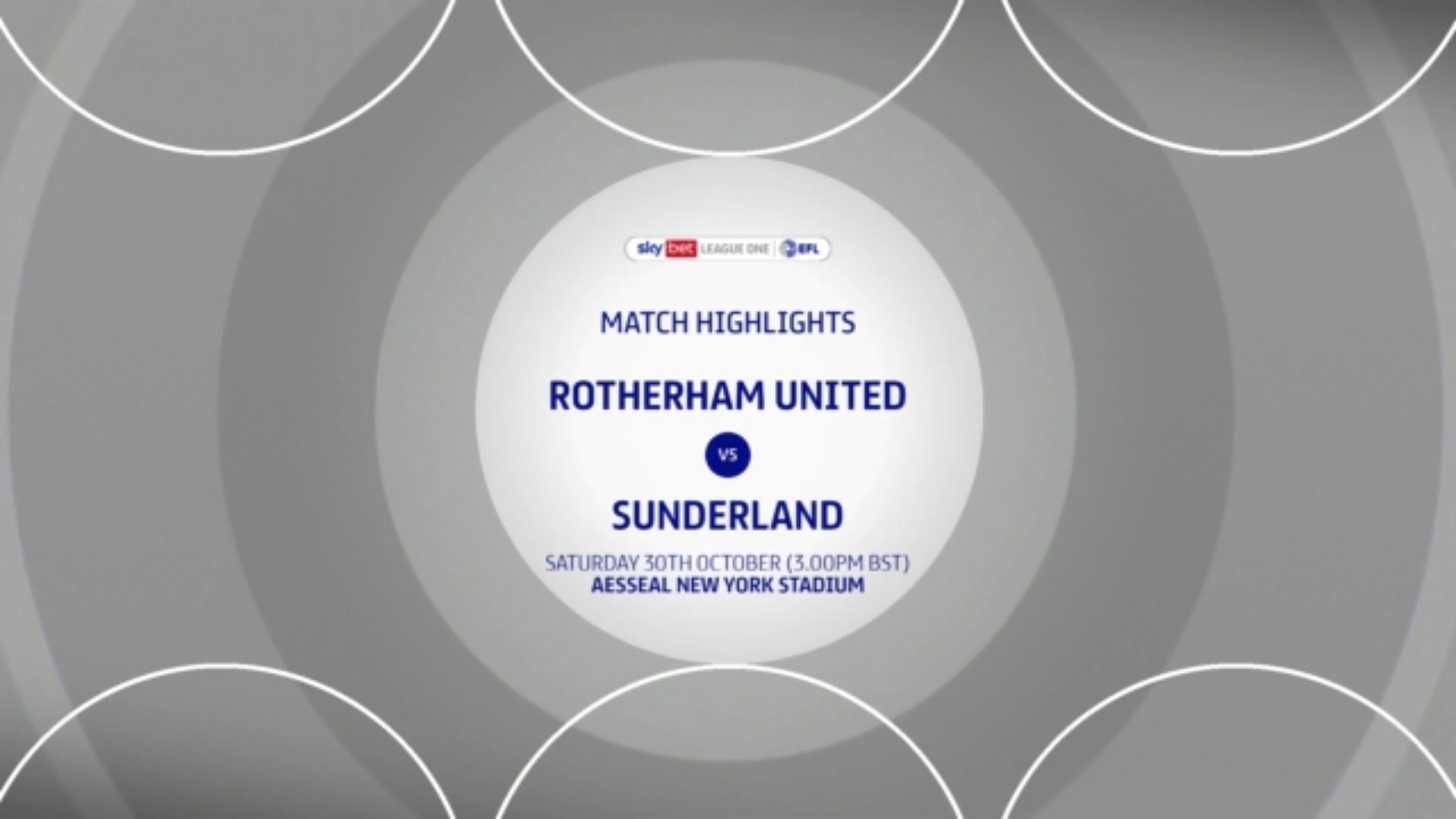 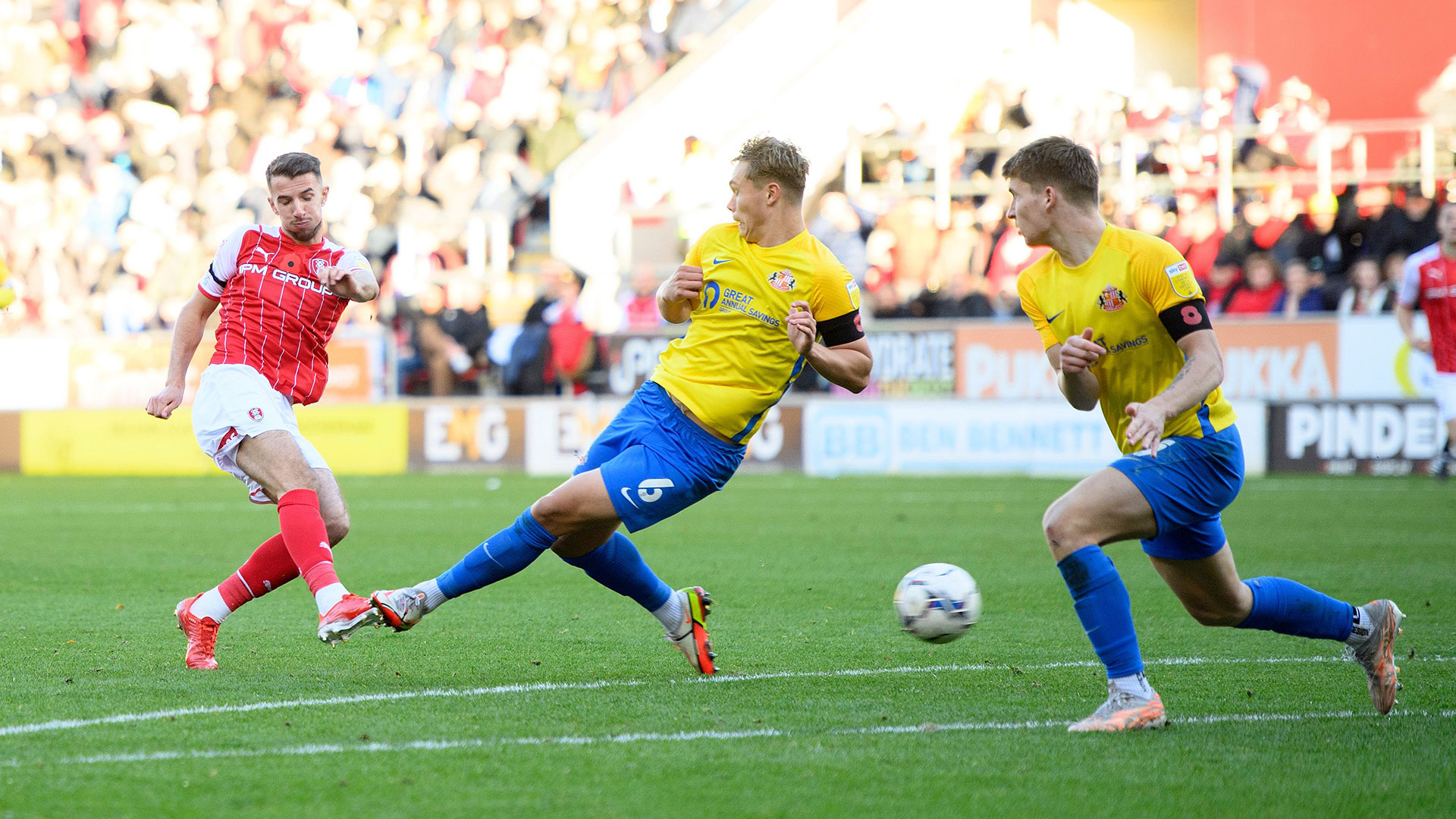