Top-scorer Michael Smith kept up his red hot form in front of goal, as his second-half strike earned Rotherham United their seventh win in eight league games, at the expense of play-off chasing Plymouth Argyle.

The Millers were given a stern test of their promotion credentials in Devon, in front of a boisterous home faithful, but Rotherham kept up their uncanny knack of striking when the opposition were on top when Smith’s 22nd goal of the season in all competitions, settled a tense clash, in the Millers favour.

Boss Paul Warne made two changes to his starting line-up from their midweek victory over Morecambe.

Experienced operator Joe Mattock was asked to ply his trade on the left-hand side of three defenders while club skipper Richard Wood was named on the bench.

Republic of Ireland international Chiedozie Ogbene was expected to provide the ammunition from the right flank, at the expense of Jordi Osei-Tutu.

The Millers started the game in a positive vein and Smith showed great backtracking to strip an Argyle forward of possession with a superb sliding tackle to start a Rotherham counter, and Shane Ferguson clipped a ball forward which Ladapo got under his spell before firing into the side netting.

Minutes later, Wes Harding had a shot deflected behind after good work by Ollie Rathbone in the build-up before Ogbene broke clear of his marker, momentarily, but his cross was diverted to safety by another home defender.

Argyle, who were roared on by a lively home crowd, had their first shot in anger when Danny Mayor tried his luck from distance but Josh Vickers could safely watch the ball sail wide.

The Millers had a big scare when Conor Grant delivered a lovely cross which was inch-perfect for Jordon Garrick, who had ghosted away from the Rotherham rearguard, but the Argyle forward’s header smashed the upright before the ball fell for Joe Edwards on the rebound, but a combination of Vickers and a number of Rotherham defenders, with some desperate defending, blocked his shot at close quarters before Grant, just seconds later, fired into the grateful hands of Vickers.

Argyle kept up the pressure on the visitors goal and Mayor, who was looking threatening at every turn, had two opportunities when he got the better of Rathbone to dart into the box before firing wide. The former Bury playmaker, just moments later, drilled a low drive which had Vickers at full stretch, to keep the ball out.

The Millers had their moments too when Ladapo found himself one-on-one with James Wilson, who blocked his shot from the edge of the box, before Rathbone’s weak effort was straight down the throat of home ‘keeper Michael Cooper.

Both teams traded yellow-cards when Dan Barlaser saw yellow for a high challenge on Garrick before Panutche Camara soon joined him in the book for cynically hauling over Ogbene in full flow.

Just before the half hour mark, Argyle failed to clear the danger decisively and Wiles showed great technique to fizz a long range effort which had Cooper nervously scrambling across goal, as it whistled just wide.

Home skipper Edwards was deservedly cautioned for a rugby tackle on Ferguson, who looked to break clear.

The Millers had their best chance of the half when Ogbene’s pinpoint cross found Ladapo in acres of space, but the highly-rated Cooper, raced off his line to cut down his options, and smother his goalbound shot, at close range.

Rotherham finished the half strongly and Ferguson’s clipped effort, with his weaker right-foot, was plucked out of the sky by Cooper before Mattock’s threaded ball saw Ladapo turn on a sixpence, but he screwed his effort wide.

The Millers started the second half as they finished the first when Rathbone turned over the ball and Ogbene left Macauley Gillesphey in his wake before finding Smith, who appeared to be in two minds, to either cross or shoot, and in essence, did neither, as the ball flew wide of the Argyle goal.

It was almost a carbon copy, at the other end of the pitch, when Ryan Hardie got on the wrong side of Michael Ihiekwe to race clear, but he elected to find Garrick, rather than go himself, and the chance was lost, as the ball skipped away from his fellow striker.

The home side missed a gilt-edged chance to break the deadlock when Hardie got the better of a duel with Ihiekwe to advance into the box with menace, but this time, he perfectly found Garrick, who looked a likely scorer, but the Argyle striker fluffed his lines with a wayward finish.

The Millers were having a tricky spell, and Warne decided to freshen his options by bringing Jordi Osei-Tutu and Hakeem Odoffin into the fray, and the move paid immediate dividends, when they opened the scoring, just two minutes later.

There looked little danger for the hosts until Rotherham made something out of nothing when Wiles got the better of Houghton to inject pace into a visitors move, before playing a perfectly-weighted pass into the path of Smith, who kept his nerve, to drill a low effort which flew past Cooper, and into the opposite corner of the goal.

Both sides then had half chances when sub Niall Ennis headed straight into the hands of Vickers before Odoffin curled an effort harmlessly over, at the other end.

There was a moment of controversy when Argyle arguably should have been reduced to ten men when Osei-Tutu had his heels clipped by Camara, who was already on a yellow card, but, bizarrely no further action was taken.

The home side almost took advantage of their fortune when Ennis low shot was superbly blocked by Harding before Houghton blazed over, soon after.

The game was in the balance and Argyle came within a whisker of an equaliser when Hardie latched onto a ball over the top before having Mattock in a daze to cut inside, and with the home fans expecting the net to ripple, the Argyle striker failed to make a clean connection with his left-footed strike, and luckily, for the Millers and a motionless Vickers, the ball shaved the outside of the upright.

The Millers fans were craving a much-needed second goal, and it almost came when firstly Ladapo was denied by Edwards with a last-ditch tackle before Smith’s dribbled effort was scrambled away from goal by Gillesphey.

The visitors net was having a charmed life, and Hardie, looked the most likely once again, when he timed a run to perfection to beat the Rotherham offside trap and with no Rotherham defender in sight, it was mano-a-mano, as he bared down on Vickers, but the Millers stopper so reliable, in recent weeks, was in imperious form, again to divert his shot away from goal.

Nerves were frayed once again when Rathbone hacked down Broom on the edge of the box, but Rotherham swept up the danger from the resultant free-kick.

Rotherham could have sealed the deal with minutes to go when Osei-Tutu had a shot blocked at close range before Ladapo was denied on the follow-up.

Ladapo fired a tame effort straight at Cooper before Broom had Argyle’s last chance of note, when he was snuffed out before he could get his shot away.

The final whistle came and the Millers' noisy band of visiting followers made the mammoth trek back to South Yorkshire in fine voice, and with another three points in their quest for Sky Bet League One promotion. 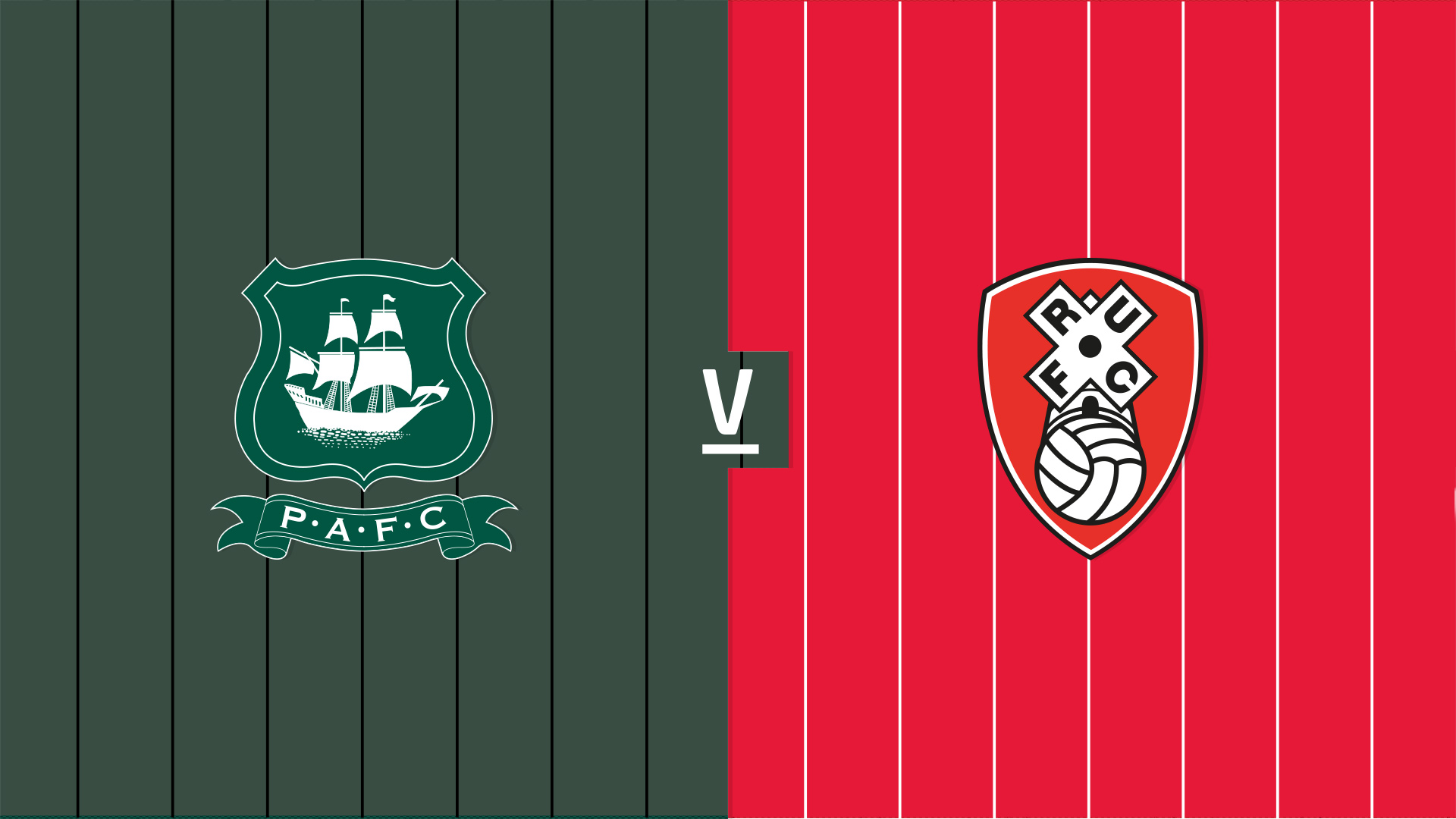 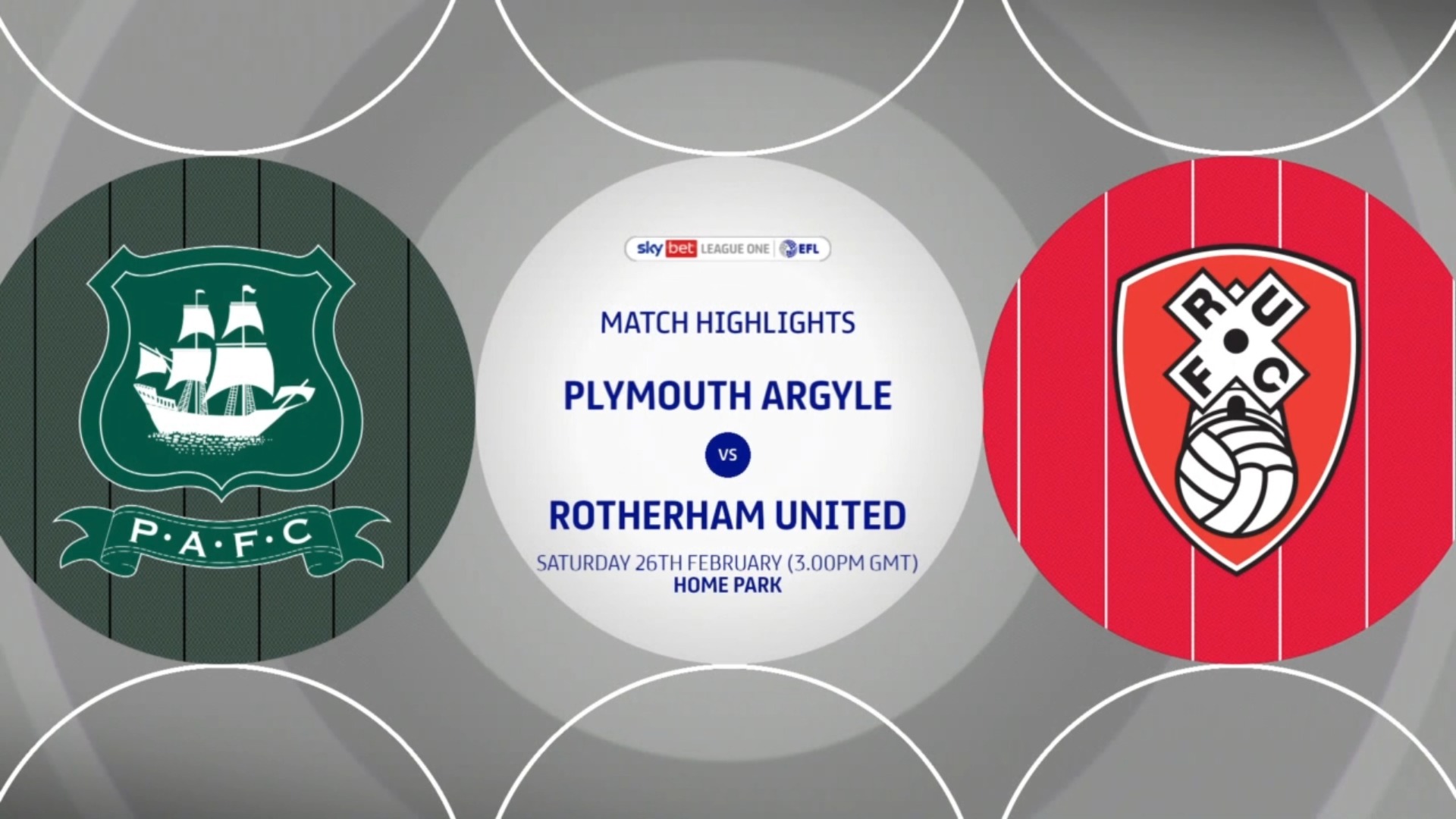 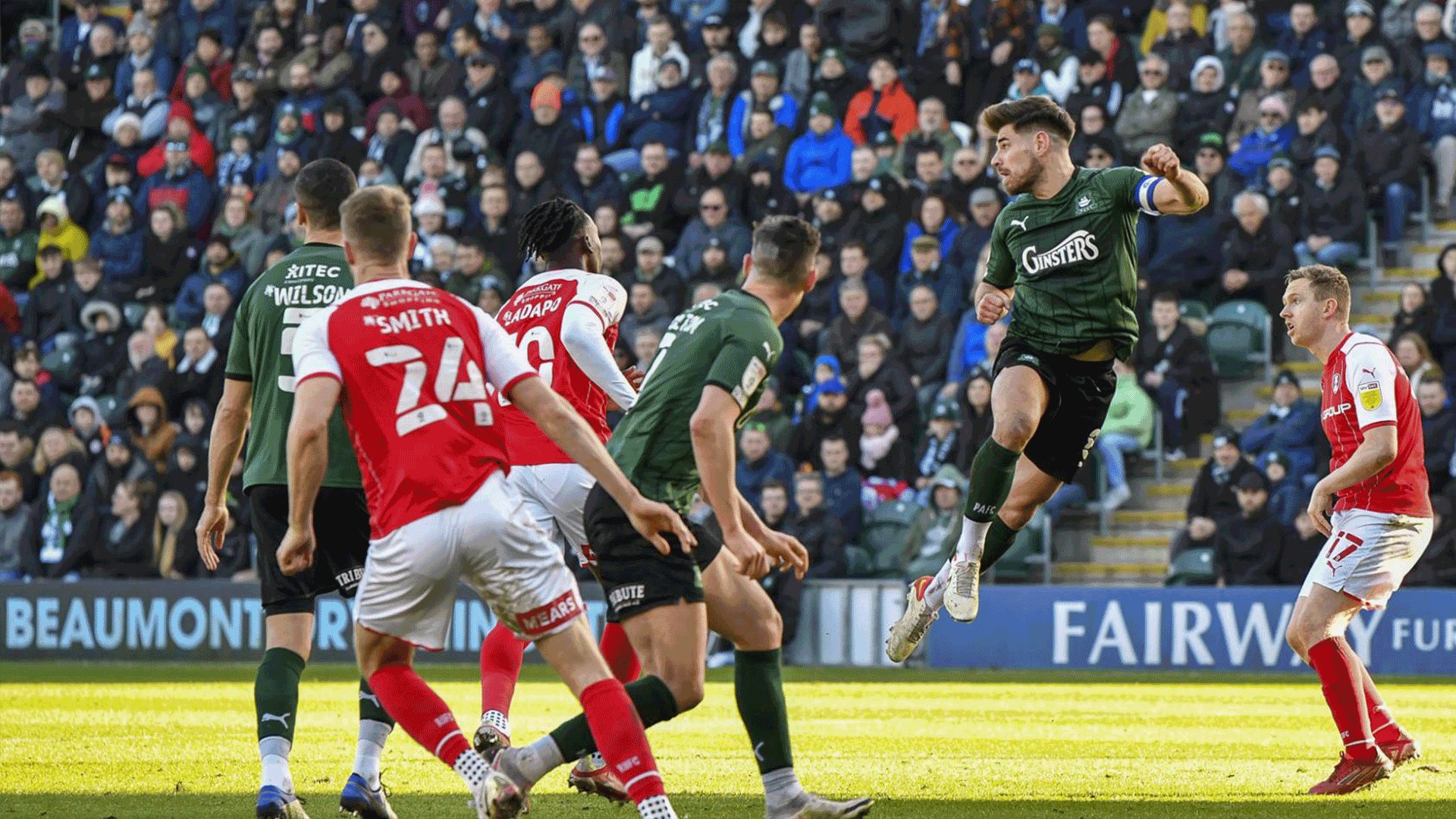