There was little to separate the sides for large spells of the AESSEAL New York Stadium affair, but Paul Warne won the battle of managerial wits with Wayne Rooney for the second time this season, as Rotherham ran riot, in the final quarter of the game.

Following their weekend reversal at the hands of Swansea City, Warne made three changes for the visit of the Rams.

Swedish stopper Viktor Johansson was handed his just fifth appearance in Rotherham colours. Centre-half Clark Robertson made his first start, since mid-October, while playmaker Dan Barlaser returned to the home engine room. Both MacDonald’s, Angus and Shaun, had to settle for substitute berths.

January signings Giles and Lewis Wing were alongside them on the bench while Derby, who travelled to the AESSEAL New York Stadium for the third time, and for the second time in 24 hours, following last night’s postponement, due to a waterlogged pitch, named four of their deadline day signings in their squad.

The Millers made a fast start when good one touch football involving Matt Crooks and Smith paved the way for Ben Wiles to burst into the box, but the Rawmarsh-born youngster lost his footing, before he could threaten the visitors’ goal.

Moments later, Barlaser’s arrowed corner saw Smith get the ball under his spell, to dig out a shot but his clipped effort struck Robertson en-route to goal before Johansson was called into action for the first time as he smothered Jason Knight’s low effort, at his near post.

The Millers then had a scare when Nathan Byrne got around the back to drill a low centre which looked inviting for Colin Kazim-Richards, who would have had a tap-in, but skipper Richard Wood stuck out a timely leg to divert the ball away from goal.

Minutes later, Robertson put in a timely header to steer Kamil Jozwiak’s dangerous corner away from Martyn Waghorn before Wood, in a carbon-copy moment, was forced to make another last-ditch clearance, in the Rams’ next attack.

Derby were having a good spell of sustained pressure and they were almost rewarded when Graeme Shinnie swung over a corner which was flicked on by Kazim-Richards and Waghorn, despite having his back to goal, attempted an overhead kick, which flew narrowly over the Millers bar.

Just before the half hour mark, Johansson raced from his goal to take the ball off the foot of Kazim-Richards following a fortunate ricochet for the visitors before Barlaser planted a perfectly-weighted free-kick into the box and Smith had a header deflected wide, under pressure from Andre Wisdom.

The Millers finished the half strongly when firstly Crooks won a hefty challenge with Max Bird on the edge of the box and Smith pounced on the loose ball, to curl an effort which forced David Marshall into a smart save before Robertson had a shot on the spin – with his favoured left-foot, but it was deflected over.

Moments later, Crooks was inches away from latching onto Barlaser’s through ball but Marshall came to Derby’s rescue with a timely clearance before the former Newcastle midfielder was creator, once again, with an inviting corner which saw Robertson emerge from the ruck of bodies to head over from point-blank range.

In the last noteworthy action of the half, Smith’s lay-off presented Crooks with the chance to hook a ball over the top and Lee Buchanan made a hash of the clearance, but Jamie Lindsay failed to punish him for his error, when he screwed his shot from the edge of the box, just wide.

In the early stages of the second 45, Rotherham squandered possession on a couple of occasions and Bird, almost made them pay, when he worked a shooting position, to curl a left-footed effort, which forced Johansson into a full-length save to keep the ball out.

Minutes later, Derby worked an opening and Buchanan fizzed a whipped centre which evaded visiting runners before Wiles became the first to see yellow for bundling over Knight in full flow.

Shinnie soon joined him in the book for a rash challenge on Crooks before Wiles led a Rotherham counter-attack and Matt Olosunde was the grateful recipient, as he fired a low effort which was straight down the throat of Marshall.

Just past the hour mark, Bird was cautioned for a cynical pull-back on halfway before Warne introduced Wing and Giles, in an attempt to turn a tight affair in the Millers favour.

However, it was one of Derby’s substitutes, who should have made the breakthrough with 17 minutes to go.

The visitors switched play to great effect and Byrne, who was a threat all night, clipped a dangerous centre into the box and Lee Gregory, in his first involvement, looked a certain scorer, as the Rotherham defence switched off, but he fluffed his lines, by glancing his header wide when it looked easier to score.

The moment proved crucial as Rotherham broke the deadlock with fourteen minutes to go.

Harding floated a free-kick into the danger area and Smith flicked the ball on, and Ihiekwe anticipated it superbly, by getting on the wrong side of his marker, and smartly steering the ball home.

In the aftermath of the goal, Ihiekwe then showed his defensive qualities by bringing Buchanan’s surging run to a halt before Rotherham took a stranglehold on the game by doubling their lead, just minutes later.

Giles showed good awareness to put Crooks in the clear and the Millers midfielder darted into the box, unchallenged, before firing a cross to the near post, and Smith shrugged off the attentions of his marker, before cutely flicking the ball into the bottom corner of the goal, giving Marshall no chance.

The visitors heads’ were in a spin and Rotherham crowned a superb late display, by grabbing a third, late on, when Byrne slipped in possession and Giles nipped his pocket, before embarking on a direct run which bisected the Derby rearguard, and he ghosted past Wisdom before firing a stinging drive – with his wand of a left-foot – and the ball fizzed into the far corner of the goal. 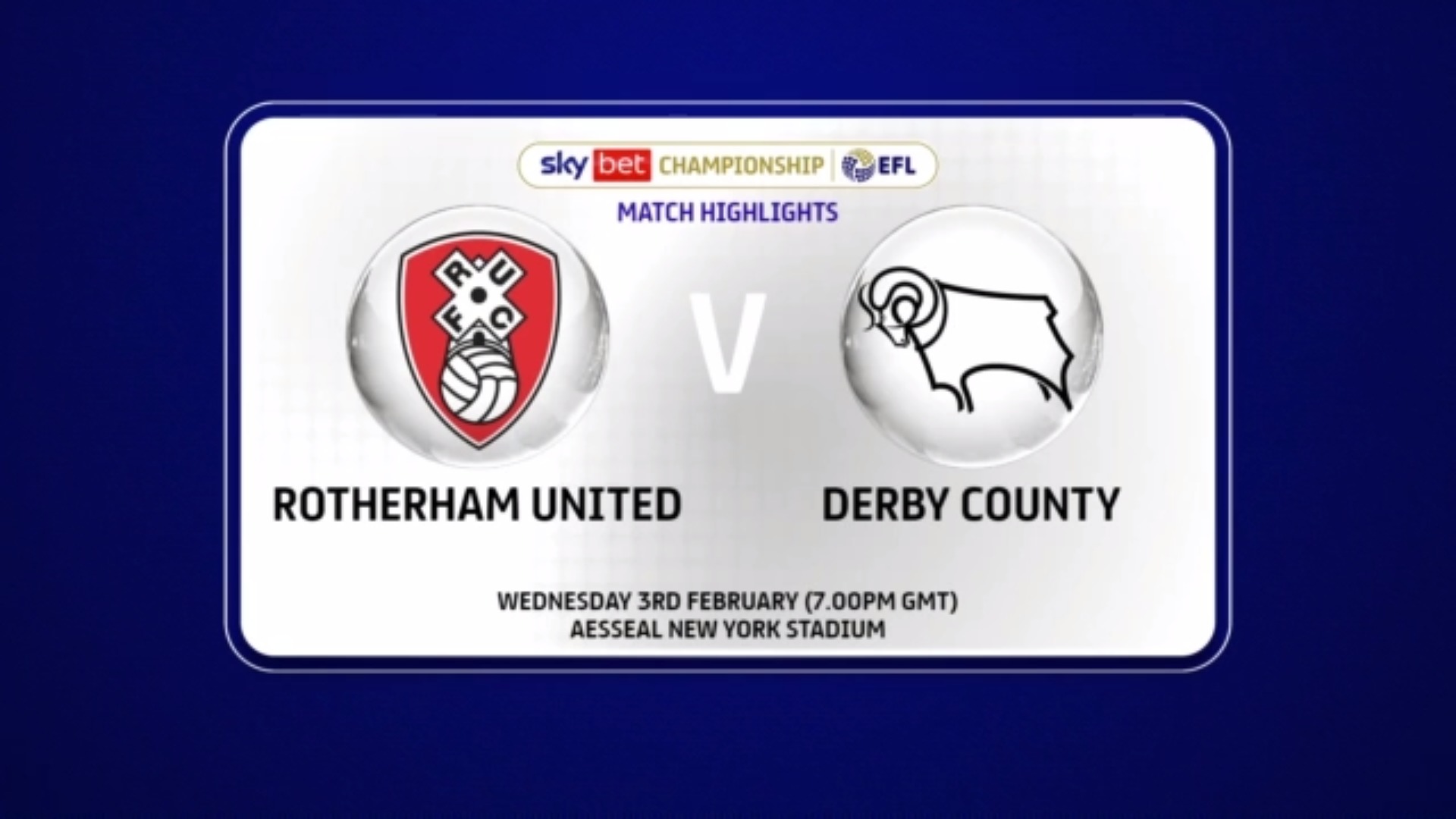 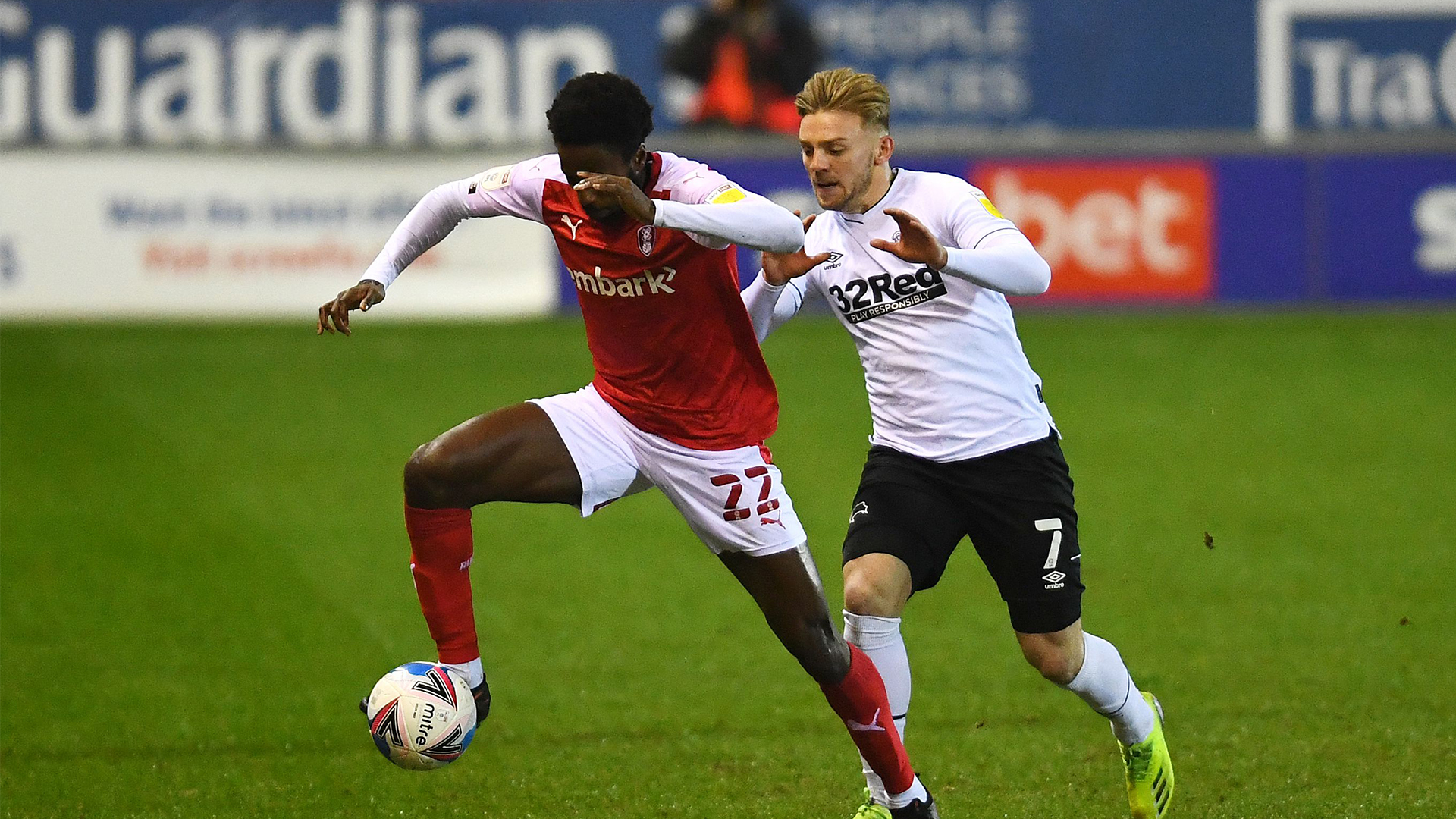 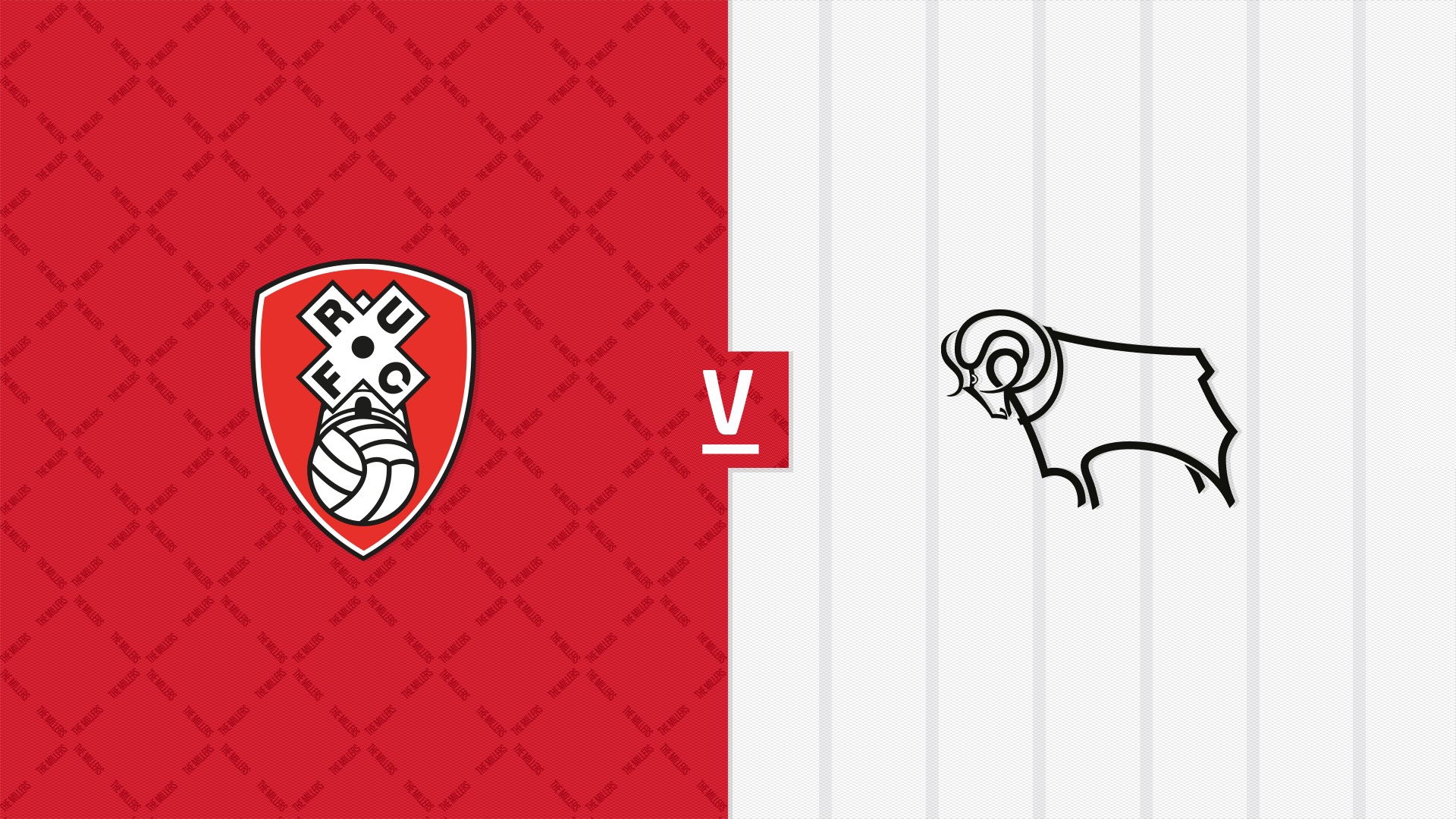